My mind was a blur. Less than two hours earlier, I’d been told that my fiancée was in critical condition and might not survive. Now I was on a flight from Denver to Los Angeles racing to get to her bedside. The flight seemed like the longest flight I’d ever taken. Minutes dragged on and seemed like hours. I remember staring out the window wondering what had gone wrong and hoping, praying that I got to the hospital in time. I remember praying,

“…Heavenly Father, I don’t understand what’s going on…but I ask you….I beg you…to protect Renée and keep her safe…keep her alive until I get to the hospital… Please Lord, watch over her…”

I also remember looking at the other passengers on the plane, seeing their smiles and thinking to myself, “My world is falling apart and no one has a clue what I’m going through.” I felt helpless and totally alone even though there were 150 other passengers on the flight. When we finally landed, my dad with my brother Steve and close friend Alex were there, waiting to drive me the hospital.

I met up with Renée’s family in the waiting room. It was here that I heard the news firsthand that Renée had fallen out of her bed in the middle of the night and broken her neck and that if she survived the next few days (plus the surgery needed to fuse her neck), she’d be quadriplegic, paralyzed from the chest down, for the rest of her life. Ironically, even though the prognosis was extremely bleak… it was still better than my worst fear which was that I wouldn’t make it to the hospital before she passed away. Whew, thank you God.

A few minutes later, I was able to get in to see Renée in the Intensive Care Unit (ICU). I don’t know what I was expecting, but what I saw and heard was beyond reason. Renée looked tired and frazzled, but as soon as she saw me, she smiled and that smile radiated to my very soul. When I got to her bedside, she looked up at me, and with a slight grin and a twinkle in her tired eyes, she whispered, “Well honey, at least we’ll get the good parking spots.” And with that we both laughed. At that moment, I realized that even if Renée’s body was broken, as long as her mind, her wit and her sense of humor were still intact, we had a chance to make this work.

God answered my prayers and kept Renée in this world until I could get to the hospital but better than that, He gave her the strength to encourage me.  At that moment, I had an unbelievable sense of comfort.  I knew that she was going to be okay.  I didn’t really understand what “okay” meant anymore, but the Holy Spirit gave me a sense of peace. Blind faith.

And so began our road of taking one day and even one minute at a time allowing us to maneuver through the obstacle course of this new life. Even though I knew the road ahead was going to be bumpy and full of tremendous challenge, Renée’s smile and sense of humor gave me the encouragement to embrace each day. I began to pray more earnestly and started my daily dialog with God. “Our” injury challenged my faith and in kind of a silly way, I realized that the Lord had answered my simple prayer. He’d kept Renée alive, so I continued to ask Him to watch over her and keep her safe. 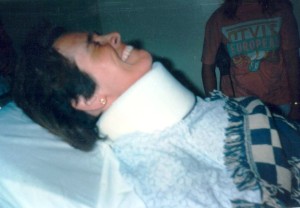 The weeks that followed were a blur. Late nights at the hospital, surgery to fuse the broken neck, prayer services with our local community and church, adjusting to my new job back in California and all while learning the world of quadriplegia – transferring her from the bed to wheelchair, bladder/bowel issues and what to do when she became faint. During this entire time, I continued with my long conversations with God, expanding my prayers beyond just Renée to now asking for protection on both of us, praying for Our Lord’s protection over us as a couple. Each time I prayed, I received peace, knowing we were being carried and protected. Every time, I received an inner peace. Our future was not clear, but our being together was certain. Through it all, we both struggled emotionally but we also laughed and prayed together. Several months later, we set a new wedding date for October 1989.

There is no question about it – following your heart is sometimes the toughest thing to do, but when we take a chance, covering it in constant prayer to Jesus, it opens us up to the most remarkable and rewarding experiences of our lives. The years that followed have included heartache, tears, pain and hardship…but they have also been filled with more laughter, joy, peace and happiness than most people see in their lives. We are the most fortunate couple I know and our love for one another, since it is coupled with our faith in a very trustworthy God, is deeper and wider than anything that could have been. We are blessed.